International Day of Women and Girls in Science

Since it was officially proclaimed in 2015 by the United Nations General Assembly, International Day of Women and Girls in Science is held on February 11th, to make visible the role that women have played and play in Science and to promote scientific vocations. We have talked with PhD. Edurne Aguado, researcher at AZTERLAN Technology Centre, about the relevance of this day and about her personal experience. 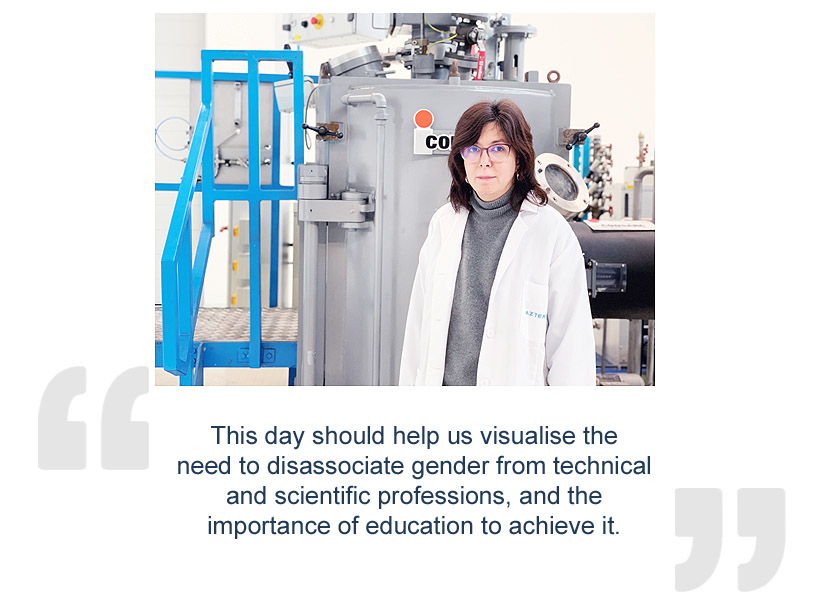 The celebration of the International Day of Women and Girls in Science is relatively new. Why do you think there is a need to vindicate the role of women in this specific area?

There are still some spaces where the role of women is less visible than men’s. The field of Science and Technology is one of them. Historically, this area of knowledge and the professions associated with it have been denied to women. Even when, having overcome diverse social constraints, certain women have accomplished significant feats, they have been denied the recognition and visibility they truly deserved. I believe that this Day responds to these two aspects: to having access to specialised knowledge and to be given the visibility that the work done by women in this field deserves.

This Day makes specific mention to girls. What do you think about that?

Without a doubt, training and education are the first step towards developing roles in society and work sphere in adult life. For its part, educational system has a fundamental role making these fields visible and accessible to both genders alike, but social and family education must provide the foundation for it. It is in everyone's hands to make the role of women in the scientific-technological field visible so that children do not feel constrained to exclusionary or limiting gender roles. This is the idea that should impregnate both educational system and society.

Which do you think are the biggest difficulties for women to access scientific and technological careers?

Although a few years ago the main problem was that women were denied access to higher education and technical studies, when this barrier has finally been overcome, in the field of science and technology there has been a clear tendency among women towards socio-sanitary and biomedical specialisations. Perhaps, although this aspect has also evolved a lot in recent years, some technical careers, such as Engineering and, without a doubt, some professions related to direct labour in the industry (machining, casting line works…) have been perceived as “more masculine”, … this could be the main obstacle.

Of course, companies have also a great responsibility to contribute to changing this perception.

Regarding your own experience, how would you describe your scientific career and your relationship with industrial environment?

I have always had a great family support. My mother was not able to study and she always pushed me to, following my personal preferences, keep studying and pursue a career. Personally, I chose to study Chemical engineering, which can also be defined as a mostly feminine specialty… but when, after obtaining my PhD., I started to plan my professional career I saw an opportunity to delve into casting technologies. At that time, I felt no obstacles and I thought I was completely capable for that profession. Since then, I have developed my professional career at AZTERLAN Metallurgy Research Centre for the last 9 years, working in diverse projects and collaborating with foundry companies.

In a daily direct contact with foundry and metal-mechanic companies, in general, I have found out that there are indeed many women working in these fields, mainly, developing jobs linked with laboratory, engineering and product development areas, and much less in direct labour jobs or other jobs along the plant.