IK4-AZTERLAN presented the latest research work about the nucleation of graphite in lamellar graphite cast iron within the 120th Metal Casting Congress in USA.

IK4-AZTERLAN’s research work “On the nucleation of graphite in lamellar graphite cast iron” was presented in the official technical program of this international congress held in Minneapolis (USA) on the 16th-19th of April.

Close to 3000 technicians and foundrymen from all over the world met in the 120th edition of the Metal Casting Congress (the reference congress in the continent about metallurgy and foundry). Latest development and technical advances where presented during the event,  related to the casting technology, with an outstanding technical program, workshops and additional working frames such as a foundry exhibition with more than 460 booths (Castexpo).

One of IK4-AZTERLAN’s research lines is focused on cast iron solidification phenomena. More precisely, IK4-AZTERLAN is working on the nucleation of graphite in lamellar graphite cast iron. The presented research work deals with the influence of certain elements such as sulfur and titanium in the nucleation and expansion phenomena of this type of materials. A detailed analysis with different sulfur (0,011-0,12% S) and titanium contents (0,013-0,32% Ti) has been carried out. 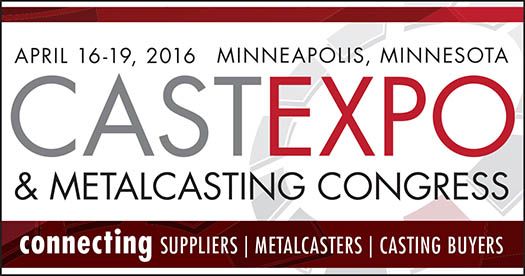